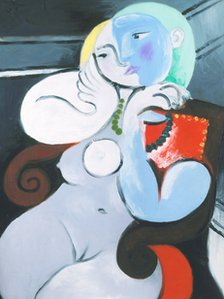 In another piece of madness relating to sexual images, Edinburgh Airport removed this image of a Picasso painting, Nude Woman in a Red Armchair (1932), which was being used to advertise an exhibition devoted to Picasso and Modern British Art at the Scottish National Gallery of Modern Art. During the removal process, the airport management had the breasts of the woman in the image covered up (but apparently not her very bare mons pubis?!).

Although the decision was reversed, it's telling that some incoming passengers were sufficiently upset to complain about it in the first place, and it's even more so that the initial decision by the management of the airport was to accede to their wishes and remove the advertisement. That's the world that we live in.

"What were they thinking?" you ask. Well, this looks like a clearly erotic image to me, albeit a mild one, asking for a rather intellectual appreciation. It is one of Picasso's celebrated portraits of his mistress, Marie-Thérèse Walter. Of course, it is highly stylised, but that does not erase its gleeful sensuality and, yes, an unmistakable sexual element, underlined by the neat visual pun where the left side of Marie-Thérèse's face (i.e. the right of the image as we look at it) is also the face of her lover, in profile, as he kisses her lips. If people are going to freak out over the public display of sexual images ... this gave them a clear-cut opportunity.

We still live in a time when the beauty and sensuality of the human body are widely considered "problematic", even in Western countries. There's much work to be done to reverse this. Conversely, there's never a shortage of prudes and Philistines, as many as you want, and you'll find them among travellers entering an advanced city like Edinburgh. Let's not give in to them - though in some quarters it's apparently too late for that.

It's one of those times when life imitates art: The Simpsons did an episode on this some years ago (Itchy and Scratchy Marge) and summarised the situation fairly aptly with the quip "Is it a masterpiece? Or just some guy with his pants down?"

The question is; whose sensibilities ought to be protected, especially in public places?

Yup, and that's a matter of judgment. But surely not the sensitivities of the hypersensitive - not those of people this sensitive.

No offence (pun intended) but if this nude is just being used as an advert --sex sells-- those in charge might respond to the complaint by getting creative, say photoshopping on a modern bikini. Those who're in on the joke might even get a kick out of it, instead of simply feeling muzzled by the hypersensitive.

We do live in an excessively sensitive age. Show me how anyone is harmed by this image--actual harm, not merely feeling twitchy.

What uproar over images like that one show is the weakness of the minds of the offended, not the offensiveness of the image. It's akin to the idea that women must wear veils because men can't control themselves.