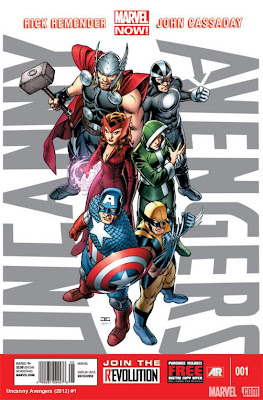 This story in USA Today gives us an update on Marvel NOW, the line-wide initiative at Marvel Comics to relaunch (but not reboot) its universe, with a massive reshuffle of creators among the old and new titles (e.g. Brian Bendis will now be moved to write X-Men rather than Avengers).

The whole initiative, which will all take place in the aftermath of the current Avengers vs. X-Men event (which I'm getting bored with), is meant to provide a jumping-on point for new fans. I suppose it can be read as Marvel's answer to DC's New 52 initiative last year.

I'm not sure what to make of the whole thing. So far, the announcements have not caught my imagination.

I'm vaguely interested in the forthcoming Uncanny Avengers book, to be written by Rick Remender, and with a mix of Avengers and X-Men teaming up. The new team includes a couple of characters who are perpetual favourites here - I'm referring to Rogue and the Scarlet Witch. The others in the line-up are Thor, Captain America, Havok, and Wolverine. That's a high-profile group of characters, but, off-hand, I can't see any particular in-story reason to get this particular bunch together. Hopefully, Marvel will contrive something vaguely plausible.

But I'm not feeling it so far.
Posted by Russell Blackford at 6:28 pm

Like The New 52, the Marvel NOW thing is just shuffling the deck chairs (whether on the Titanic or on a less-doomed boat is up for debate). At least Marvel respects their fans enough to let the continuity they've been following for years or decades to be unaltered.

I'm not excited, per se, about Hickman's Avengers and New Avengers, where everyone is an Avenger now, including some version of Jean Grey and Cyclops. (Spoilers.) I'm somewhat interested in Uncanny Avengers, largely because of Havok, and I also like Rogue and Wanda. It's hardly a decision for me to pass on Bendis's All-New X-Men, which is apparently the original 1960s team in the modern Marvel era (because comics). The other titles teased so far are just new creative line ups on existing titles.

5000 whining atheists vs the Great Prophet