I do like this piece in The Sydney Morning Herald. It all sounds pretty accurate to me - but endearing, rather than anything else. Yes, it does seem crazy that there's such a fondness for goddamn Ned Kelly - a criminal of less than Robin-Hood-like virtues.

Yes, the Aussie habit of abbreviating words must seem odd to outsiders, but what the hey? We could have worse traditions.

One well-known Australian tradition, discussed in the article, is for women to return home barefoot after a day of getting pissed at the races - pictured below. This can also apply to a night at the disco, or whatever.

But none of these qualifies as the most controversial of Australian traditions. When you go to the comment thread you find an unexpected outcome in that regard. 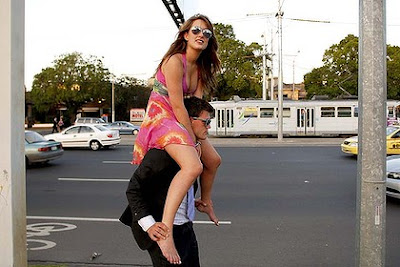 The most controversial of the traditions discussed is that of asking your friends or rellies (Australian for "relations") to "bring a plate" to a party or similar get-together. If you skim through the comments, this one causes real angst, or more like class warfare. Observe the fierce arguments for and against! Thus, "Tito" says:

Why invite someone over - when your guest has to bring their own food.
If you can't afford the party - then there isn't a party.
It's not the Depression - well not yet!


Ha! This person clearly just doesn't get it.

But I do like the wry observation from "Birdie":

I am now used to the idea of bring my own food to a party - otherwise there wont be much to eat.


I hope it's not really that bad in this person's life.
Posted by Russell Blackford at 7:20 pm

"The most controversial of the traditions discussed is that of asking your friends or rellies (Australian for 'relations') to 'bring a plate' to a party or similar get-together."

As an American, I find it weird that this would be considered controversial. A party where participants "bring a plate" is called a potluck where I'm from.

Yes, a number of people in the thread say that as well. Seems like a class-based thing to me.

Not at all an Australian thing. It's an English thing, with counterparts in many languages.

Why does he think it's something peculiar, much less Aussie peculiar?

Do other cultures actually use the expression, "bing a plate", though? I think part of the problem for the author of the article is supposed to be the idiom for it (though the commenters are passionately discussing the merits of the practice itself).

I never heard "bring a plate" used in that way before, so I gather that probably is an Australian idiom.

Hehe, "bring a plate" of course, not "bing a plate" - though that might be an interesting idiom.

In the States (or at least the part of the states I come from -- upstate NY -- and I believe I've heard it elsewhere, in as far-ranging a place as Utah) the expression is "bring a dish to pass", but if you shortened it to "bring a dish" I don't think anyone would be confused.

So I don't think "bring a plate" is that weird, just different.

(Ah geez, this Captcha is gonna give me trouble)

It is good, though, that in this age of globalization, Australia is still maintaining its individuality.

We use Bring a Plate in NZ too. Has confused many an overseas visitor.

In the States (the parts I've lived in) we don't say 'bring a plate.' we just say 'it's a potluck.' That's considered sufficient.

If you're too busy to make food to bring,you can always buy pre-made food at a grocery store (potato or macaroni salad, fried chicken, pie, etc). But many who go this route will (rightly) apologize to the host while remarking that they were extremely busy.

Sometimes bringing a lot of beer or alcohol instead of food may not require an apology.

Also, one can arrive after all or most of the food is consumed without need of apology.