What is a sexual image? 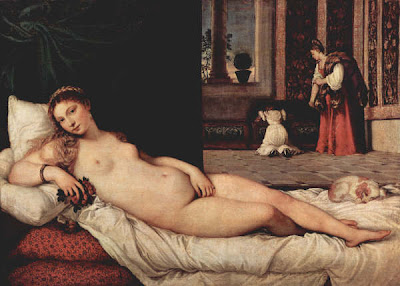 Posted by Russell Blackford at 1:31 pm

She playing with herself?

A sexual image is an image that excites sexually.

Note that the intent of the creator (the artist, the gods, the gaseous cloud that became the solar system, what?) doesn't matter in that definition. The fact that most of us are wired in the same basic ways means that there's broad agreement on what we find stimulating, but my pig-headed (or simple-minded) way of putting it takes into account any number of oddities.

But perhaps you mean to ask what the broad agreement is. That pulls me out of linguistics and lexicography and into psychology, a related, but murky field. And that agreement shifts over time, or so human art work suggests. I also imagine that even after much discussion, we'd end up right back where I started this.

I guess I'm trying to get a handle on what the expression means as a composite to ordinary (or perhaps ordinary educated) speakers of the language. I'm not sure that ordinary speakers of the language do analyse it as "an image that excites sexually" ... more likely (though I only suspect this and don't claim I have proof) they have a vague idea of what sorts of images fall under the phrase as a phrase. It would then be interesting to see what those images have in common.

I suspect (again) that some might not be likely to excite most people sexually. E.g. an image of two very ugly people having sex may actually have the opposite effect! It would be a turn-off. But I'm betting that most people will still classify it as a sexual image.

Obviously what I'm doing in this post is not scientific, but it would still be of some indicative interest to see what people say about the images posted and other kinds of images that they can think of.

Add the idea that a sexual image is a depiction of the act of sexual intercourse. Unfortunately, as you pointed out, even that has problems. Do we mean "standard" sex? What about a male fish and female fish spreading seed and eggs in the water?

It seems that the question here focuses on the response of the viewer, not on the content of the image. Here in America, we had a Supreme Court justice who said about pornography that he couldn't define it, but he knew it when he saw it. The trouble there is that it assumes that everyone else has the same response.

Perhaps I'm being a bit of the positivist, but I want the term to mean as much as we know. Anything beyond that has to ask, What is a sexual image to you?

I don't think the definition is necessarily an intrinsic aspect of the image.

A perfectly innocent picture of children playing can be masturbatory material for one person and a photo of an explicitly sexual act can be someone else's 'experiment in form'.

The image is framed by different social contexts (a family album, a pornographic magazine, the wall of an art gallery) and by the psychology of the viewer.

FWIW, I think the picture two posts ago is more sexual than this one...

You mean the young couple with the woman sitting on the guy's shoulders? Or did you mean the Black Widow, three posts back?

I meant the young couple.

But ANY picture of Scarlett Johanssen is a sexual image (for me).

*Can't speak for women, or gay men, but I assume there are images I'd consider technically non-sexual that they might find sexual.