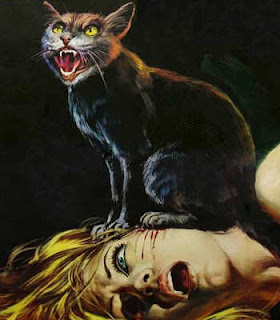 The cruel and murderous narrator of Edgar Allen Poe's "The Black Cat" says:


In the meantime the cat slowly recovered. The socket of the lost eye presented, it is true, a frightful appearance, but he no longer appeared to suffer any pain. He went about the house as usual, but, as might be expected, fled in extreme terror at my approach. I had so much of my old heart left, as to be at first grieved by this evident dislike on the part of a creature which had once so loved me. But this feeling soon gave place to irritation. And then came, as if to my final and irrevocable overthrow, the spirit of PERVERSENESS. Of this spirit philosophy takes no account. Yet I am not more sure that my soul lives, than I am that perverseness is one of the primitive impulses of the human heart - one of the indivisible primary faculties, or sentiments, which give direction to the character of Man. Who has not, a hundred times, found himself committing a vile or a silly action, for no other reason than because he knows he should not? Have we not a perpetual inclination, in the teeth of our best judgment, to violate that which is Law , merely because we understand it to be such? This spirit of perverseness, I say, came to my final overthrow. It was this unfathomable longing of the soul to vex itself - to offer violence to its own nature - to do wrong for the wrong's sake only - that urged me to continue and finally to consummate the injury I had inflicted upon the unoffending brute. One morning, in cool blood, I slipped a noose about its neck and hung it to the limb of a tree; - hung it with the tears streaming from my eyes, and with the bitterest remorse at my heart; - hung it because I knew that it had loved me, and because I felt it had given me no reason of offence; - hung it because I knew that in so doing I was committing a sin - a deadly sin that would so jeopardize my immortal soul as to place it - if such a thing were possible - even beyond the reach of the infinite mercy of the Most Merciful and Most Terrible God.


This is villainy of an extraordinary kind. The narrator is not superpowered, but the villainy is of a superlative level. It seems that he acts in horrible ways precisely because he recognises them as evil.

He is not rejecting some familiar moral standard and embracing an alternative, as Milton's Satan arguably does ("Evil, be thou my good"). Nor does he disregard standards of good and evil, perhaps simply not being motivated by them, but only by such things as ambition or greed. He does not regard such standards as merely conventional - as, perhaps, psychopaths do. He goes further in seemingly accepting these standards as absolute, binding, and horribly consequential, but he violates them for the sake of doing so, or so some of his statements appear to say.

It is difficult to think of other characters in literary or popular narratives with that kind of motivation, at least spelled out explicitly in this way. Again, the narrator of "The Black Cat" is not merely evil, or malevolent, or disposed to act in ways that are inimical to the interests of other sentient living things. He even seems to go beyond psychopathy. There is something more pure about this kind of evil.

Does anyone else in the ocean of literary narrative act like this - or so clearly? Probably not Shakespeare's Iago, generally thought of as one of the most horrible characters in our literary heritage. Iago's evil acts, which produce the catastrophic events of Othello, are given various weirdly confused and inadequate motivations, making him seem oddly motiveless as he wreaks destruction on people's lives, but he does not perform acts that he, himself, regards as evil ... and because he regards them as evil. Or anyway, so it seems to me.

Richard Joyce points to certain characters depicted by de Sade, to Shakespeare's Aaron from Titus Andronicus, and, yes, to the narrator of "The Black Cat". Perhaps we can think of others from fantasy fiction in particular. I'd be interested in suggestions, but bear in mind the very high hurdle that has to be surmounted. The character's actions must not only be evil by our standards, or by some standard believed to be objective, or in accordance with some concept of evil as equivalent to, say, psychopathy, sadism, callousness, fanaticism, or malevolence. We are looking for characters who perform evil acts that they themselves regard as evil in an absolute sense, and perform them precisely because they regard the acts as evil in that sense.

Poe, Shakespeare, de Sade, and perhaps other authors seem to think that this kind of psychology is possible and even recognisable. People can be driven to act wickedly even by their own fully-endorsed standards of what is wicked. Poe's narrator appeals to us to recognise this kind of motivation, almost as if Poe thinks it a familiar phenomenon.

But is this picture coherent? I can see why we might be tempted to attribute such an extreme psychology to someone we regard as evil, perhaps a psychopath who does terribly cruel things that he himself will (if asked) report to be morally wrong. But I think that if we do so in such a case we take a step beyond what is justified on the facts. Very likely the psychopath does not feel absolutely bound by standards of right and wrong, and does not differentiate any such standards from mere social conventions. He (most psychopaths are male) may take pleasure in ideas of destruction and suffering, and also in the idea of subverting or transgressing the socially accepted rules. But that's a different point.

The narrator of "The Black Cat" seems to go one step further into evil, and I'm not sure that this step is possible ... or that what I've described (assume for the sake of argument that it is faithful to what Poe presents to us) is actually coherent. What do you think?
Posted by Russell Blackford at 9:52 pm

The narrator of "The Black Cat" is suffering from alcoholism, inviting us to read the narrator's state of mind as an artificially induced inversion of natural inclination. He aims for Evil instead of Good, because his moral compass has been reversed by alcohol.

To meet your challenge: How about the villain in the original version of "The Vanishing" (1988)? He is a father who, after doing something heroic, decides to prove to himself that he can do something as purely evil as his other act was purely good. I don't remember if this was explicit in the American version of the film, but in the original version, it is quite explicit: He commits a terrible act merely because he thinks it is a terrible act.

Also, it's worth emphasizing that Poe's narrator, in his madness, is not aiming at evil for its own sake necessarily, but aiming at evil as a means of damnation. He wants to go to Hell. That factor distinguishes him from the villain in "The Vanishing," for example, who may not even believe in Hell.

Yes, you're quite right that alcoholism has brought this on - good ol' moralistic Poe. Not sure about the guy in The Vanishing. He seemed a bit like a motiveless malignancy to me, even if he was given some motive ...but I haven't seen it since it was first released in cinemas 20+ years ago, and didn't watch it with anything like this in mind. He certainly seems evil. Thanks for the suggestion.

"We are looking for characters who perform evil acts that they themselves regard as evil in an absolute sense, and perform them precisely because they regard the acts as evil in that sense."

It's that second part that's the tricky one. It's not that hard to find villains who call themselves evil; a lot of kids' show villains do that. However, villains who do evil things just for the sake of being evil, rather than out of greed or spite or self-interest, well that seems much rarer.

The villain in the American remake seems more motiveless. In the original, Dutch film, he's explicit about his motive. Here's what he says: "My daughter was bursting with pride. But I thought that her admiration wasn't worth anything unless I could prove myself absolutely incapable of doing anything evil. And as black cannot exist without white, I logically conceived the most horrible deed that I could envision right at that moment."

If he is not capable of doing evil, then why praise him for doing good? He must show that he's capable of the worst possible evil, so that his choice of doing good is worthy of such praise.

Oops. My analysis is all wrong. I always thought he said he must show that he's capable of doing something evil! So I guess he tries to prove to himself that he's really a good person to the bone. And I guess he fails.

Also plenty of villains who do evil unprovoked and feel bad about it.

It's worth noting, by the way, that Poe had plenty of bad personal experience of his with alcohol. OTOH, he was apparently nice to his cat. I wonder whether he ever felt tempted to do something terrible to it the way his narrator does.