Damien Broderick's new book, Skiffy and Mimesis, which takes its title from an essay of mine that's included, is now available - or about to be by the time of the Worldcon (now only two weeks away). 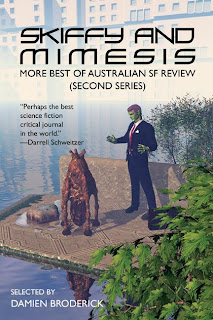 This book is a companion to Chained to the Alien. Between them, they reprint much of the best material in Australian Science Fiction Review, Second Series, the classic zine whose run went from 1986 to 1991 and managed to win a Ditmar Award towards the end. As one of the editors and most frequent contributors to the zine, I obviously have a vested interested in the two books that Damien has put together ... but please consider!

I still think that we had some exciting discussions back then, and that it's fascinating to read now, twenty-odd years later. Those were the days before the internet, before it was possible to be enbroiled in debate with an international cast every day. But the quality of discussion of Australian and international science fiction was, I believe, high, and the zine made some reputations.
Posted by Russell Blackford at 11:24 am