I've just read X-Men Legacy #239 and I've gotta say that Mike Carey and Clay Mann are still doing a wonderful job interpreting the universe of X-Men. Superhero comics can't be judged by the same criteria as novels and short stories: apart from anything else, there's a need to make the action move very quickly, even at the risk of overriding character for plot ... not to mention a kind of licensed recklessness about using coincidences, and of course the inherent implausibility of the whole set-up with all these superhuman beings running around. But there are standards for pace, skilled interpretation and development of long-running characters, and narrative risk-taking, as when Marvel took the unlikely but (to my mind) successful decision to hook up goody-goody Scott Summers (Cyclops ... who has become much darker) with decadent and cynical Emma Frost.

Carey's interpretation of the main characters in this arc - Rogue, Magneto, and three of the young students - is brilliant. We get a bit of fun in the opening pages as they quickly demolish a few gigantic Sentinel robots who are causing trouble in Mumbai, and it goes on from there with lots of twists and turns, some of them laugh-out-loud funny. 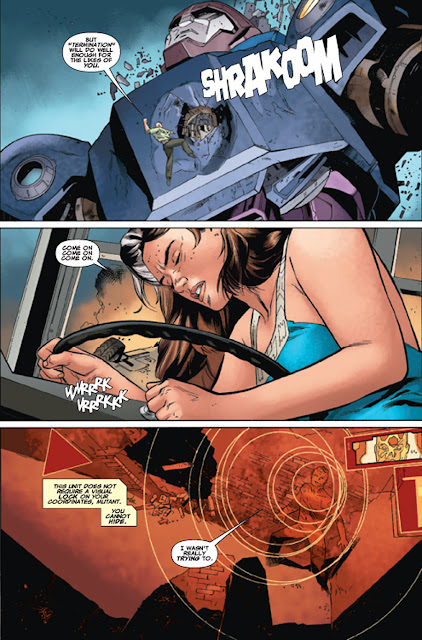 I'm enoying the tension between Rogue and the rejuvenated Magneto (he was rejuvenated to about 30, way back in the 1970s in real-world time ... and about 10 years have since passed within the diegesis). It's long been established that these two are attracted to each other, and they once stayed together for a time in one of Magneto's Antarctic bases ... but Mags managed to alienate Rogue before they could even start an actual love affair. He's continued to alienate her since, not least by his ongoing habit of killing people (usually bad guys, but still ...) right before her eyes - something he's promised to cut down on. Even now that he's sane and more-or-less one of the good guys, Magneto remains obsessed, overbearing, and ruthless, but Rogue can't help liking him for some reason, even though he also drives her nuts. She totally loses her cool with him in this issue when he tells her to use her powers to violate another person's mind to find out the truth about her. I love all this soap opera!

Please, oh corporate rulers at Marvel Comics, keep things more or less like this - developing the scenario rather than trashing it. It would be boring, and a let-down, if someone decided that it's time to make Magneto go psychotic again and turn back into an outright villain. Ho hum to that. He's much more interesting and fun in this anti-hero mode. Meanwhile, the current X-Men set-up is fascinating overall, with many of the heroes and quite a few former villains having united in the face of adversity on their island that they call Utopia, off the coast of San Francisco. Scott Summers is now in charge of a small nation of mutants and assorted misfits, and his field orders are (usually) accepted by the core X-Men ... but he's flanked by uber-powerful counsellors whom he needs for support as much as they need him for legitimacy. The future possibilities for intrigue, clashing visions, and political conflicts are endless.

For now, Carey has been building up suspense through the current Legacy arc by showing us from time to time what's going on with the Children of the Vault - a city of superhumans who consider the X-Men their bitter enemies. As issue # 239 draws to a close, Magneto, Rogue, and the kids are about to have a show-down with what looks like an angry and very powerful team sent by the Children of the Vault. Cool!

I'm a big fan of Clay Mann's artwork - he interprets the characters astutely, showing them as beautiful (of course, these are superheroes!) but not absurdly so. Even lizard-boy Anole looks like a rather handsome reptile, while Indra is a young hunk if you go for purple skin tones. Rogue and Loa look, respectively, like an attractive young woman of about 25 and a pretty-but-gawky teenage girl. They don't appear hypersexualised and anatomically improbable, but are much more like real women. Their movements are realistic, and all the characters are portrayed at times in the awkward positions of people being photographed in motion and unawares. Magneto is physically imposing, but he could still pass as a reasonably normal athletic man of about 40. I like the way they are all wearing street clothes throughout, on what was not intended to be a combat mission. More generally, Mann is technically superb, with imaginative angles on the characters and events.

All in all, I'm loving this creative team and this current arc. Keep it up, guys!
Posted by Russell Blackford at 12:39 pm

"They don't appear hypersexualised and anatomically improbable, but are much more like real women. Their movements are realistic, and all the characters are portrayed at times in the awkward positions of people being photographed in motion and unawares."

I gather then that they don't suffer from the "Why won't my hips unsway?" problem?

O.T. - have you ever read Lucifer?

Indeed. It's rather sad that there was even an "artist," Greg Land, whose depictions of women were infamous for looking like they were traced from girlie mags. Judging from what you've had to say, he was a stark contrast from Clay Mann.

"It's long been established that these two are attracted to each other..."

Wha? Rogue and Magneto? Wow, things have changed in the X-Universe since I last visited.

P.S., that D.M. guy is a fucking asshole (and totally boring, which is worse).

Greg Land's art is beautiful for what it is. I'm ambivalent about it and the controversial techniques he uses; It's not that I spend that much time thinking about comic-book art. He certainly injects a lot of cheesecake factor, though. Then again, there are much worse artists around for drawing women who are anatomically impossible.

Anyway, I find Clay Mann's approach refreshing. In accordance with convention, the superheroines are beautiful ... but in varied and realistic ways.

Spencer, you need to go back to Uncanny X-Men 296 (from memory) about 20 years ago. Writers have been toying with the Rogue/Magneto relationship ever since.

Of course these are not Anna Paquin and Ian McKellen, which would look pretty implausible. Magneto has been physically in his 30s and is now about 40. Rogue is grown up and must now be getting towards 25. Given that Mags was actually born in the 1920s, but has been rejuvenated, that may be a stretch for a real relationship, but there are crazier things in comics, and the attraction is plausible enough (not that you said otherwise; I'm just filling out the background for readers who are thinking of the movies).

Personally, I think Mags needs to find someone more ruthless; Rogue is too nice, and she's always going to be pissed off by his little ways. But we'll see what the writers do with it. The Emma and Scott thing works, after all, improbable as it would have sounded, and the Magneto/Rogue interactions are a lot of fun.

thanks for the kind words