Talking about horror in Montreal 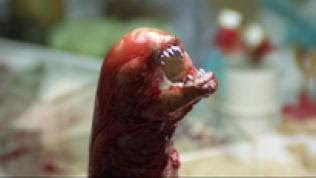 This video - the Alien one on the site - is from my last trip to North America, a couple of months ago, when I visited Montreal for the annual World Science Fiction Convention.

I was nabbed for the interview immediately after I spoke on a panel about the movie Alien and its sequels, in celebration of the 30th anniversary of the original movie. I was geared up for this because I was also on a separate panel about the horror genre, and had been thinking about what separates it from, say fanatasy narratives or action thrillerss.

On the Alien anniverary panel, I made the case that Alien is a quintessential horror movie despite (or in addition to) its science fiction elements. If I may say so, I was pretty pleased with my performance on the panel ... but less so with my interview performance (partly because I was getting pretty tired - at this stage I was just getting over a fairly serious illness and my voice was still croaky).

But I think it's come out pretty well, the way my interview is intercut with scenes from the movie itself. Go and have a look - it's only a few minutes. I really like some of the juxtapositions of my descriptions of specific elements of the movie with scary scenes from Alien.

More generally, I hadn't previously heard of this media site, The Electric Playground ... but it sure seems cool.
Posted by Russell Blackford at 5:01 pm

What, no one's going to comment on my performance?