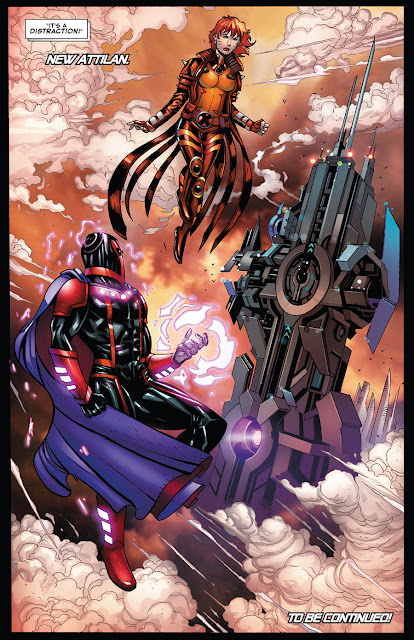 I just plain like this panel, with art by Andrea Broccardo, from "Civil War II: X-Men 3" - in the current X-Men tie-in series to the current Civil War II series from Marvel. Here, Magneto and Rachel Grey take it on themselves to invade Attilan, home of the Inhumans.

Magneto is now more an anti-hero than an outright villain, and Rachel is not really villainous even though she has a mean streak. But they'll do for today's purpose.

[If you're not a fan of all the arcane X-Men continuity, you need to know that Rachel Grey is the time-travelling daughter of Jean Grey and Cyclops, from a dystopian future. She has a similar set of powers to her mother, but something of an edgier personality, having endured a future Holocaust-like situation. Magneto is, of course, in the comics, a Holocaust survivor who has been rejuvenated to his physical prime. I like the fact that Cullen Bunn, the writer of the tie-in series, has delved into old continuity to recall that these two always got along. The decades of layered continuity inevitably mean that casual comics readers will find a lot of stuff puzzling ... like why Rachel Grey seems older than the current version of Jean Grey running around. But oh well... Meanwhile, I simply like this well-composed, classic style panel.]
Posted by Russell Blackford at 11:14 am