Sunday supervillainy (a bit belated) - Thunderbolts 3, or what? (Spoilers) 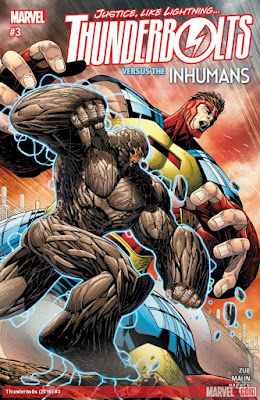 A few weeks ago, I gave a shout-out to the new Thunderbolts comics series written by Jim Zub, which had reached a point of suspense at the end of its second issue.

Like earlier series featuring the Thunderbolts, this one shows the adventures of a bunch of villains who are only equivocally reformed (some, let's say, more equivocally than others). The Thunderbolts began as a sub-set of the Avengers' sworn enemies, the Masters of Evil, but their modus operandi was to play the role of superheroes as part of a long game. Some of them enjoyed the role, with its associated adulation, but they remained morally flawed individuals.

In this iteration of Thunderbolts, we have a classic line-up of the team: Moonstone; Atlas (the original Power Man, though he is much more formidable these days than originally, since he possesses high-level superhuman strength even at his normal human size, plus the ability to grow larger, even to truly enormous sizes); Mach-10 (the original Beetle, though his high-tech battlesuit has evolved over the years to rival that of Iron Man); and the Fixer.

They're now led by James "Bucky" Barnes - a.k.a. the Winter Soldier - and they have in tow Kobik, a reality-bending Cosmic Cube who manifests as a little girl. All in all, this is a nicely balanced combination of characters. Some of them have enough history with each other - dating back to the Masters of Evil days - to be more or less friends; however, you'd be wise not to trust the friendly feelings of Moonstone in particular. If there's any sense that these supercrooks are a family, it's an unusually dysfunctional one.

Moonstone is actually my favourite among them. Over the years, she's been the mainstay of the team in most of its incarnations. She's a versatile and effective supervillain, gifted with a wide array of powers as well as with intellectual flair. But she is also the closest thing the Thunderbolts have to a genuinely evil character, with her constant scheming and a near-psychopathic level of focus on her own ambitions and objectives. You'd hate to know someone like Moonstone in real life, but as a character in superhero comics she's a continual source of fun and trouble (and she pretty often gets her way). I hope she'll be brought to the Marvel Cinematic Universe at some stage, in all her glory.

Issue #3 of Thunderbolts starts with the showdown previously set in place between the Thunderbolts and a powerful team of Inhumans - led by one of their heavy hitters, Crystal - who view the Thunderbolts as having just massacred a large number of their people. As the Thunderbolts see things, they have, on the contrary, rather brutally put down an alien invasion of Earth. (As we learn, there's some ambiguity about the nature of the giant pods, and the monstrous beings that emerged from them, that we saw in the previous issue - all of which the Thunderbolts destroyed.)

As their fight with the Inhumans begins, the Thunderbolts are disadvantaged by the fact that Moonstone is already badly injured (having been almost killed by Kobik a couple of issues before) and is scarcely able to walk. With Moonstone hurt, and Kobik kept out of the fray for fear of what crazy thing she might do next, the Inhumans seem to have the Thunderbolts outnumbered and outgunned... But the Thunderbolts are a tough bunch, equipped with plenty of technology, fighting skills, and raw strength. Thanks partly to the efforts of the overtowering Atlas, but mainly to the Fixer's sneakiness and technology, they surprisingly get the better of their opponents, then make a fairly clean getaway.

By the end of the issue, Atlas and Mach-10 are enjoying a beer together, offering one to Bucky, and generally celebrating what they see as a good outcome. "So, does that mission go in the 'win' column or what?" Atlas says a bit smugly. But the downside is that they are now squarely on the radar of crimefighting authorities such as S.H.I.E.L.D. and have a growing set of problems. "Let's ... let's call it an 'or what,' okay?" says Bucky, who understands the bigger picture (by contrast, Atlas regards things very simply: from what we've seen so far, he just likes to come out on top in, as he puts it, a good scrap).

Later, Bucky reads Kobik a bed-time story, ending with a moral about the power of the imagination, though for him imagination is, perhaps, a curse rather than a blessing. Meanwhile, the two genius-level baddies, Moonstone and the Fixer, conspire over what to do about the unpredictable Kobik. The Fixer wants to kill her, while the still-recovering Moonstone wants to manipulate her psychologically to get control of her power. (By this point, Moonstone is drifting a little in the direction of full-on "I will rule the world!" megalomania.)

I said that Moonstone is my favourite, but I'm fond of all the Thunderbolts. Atlas is endearing in his way, being one of the most physically powerful characters on the Marvel Universe's version of Earth... but without the intellect or imagination to put his great strength to any ambitious purpose of his own devising. He's always seemed a bit of an unfortunate schmuck, led around by others, rather than a really villainous supervillain.

We all love stories about redemption, and there's plenty of need for it in Thunderbolts. Even the Winter Soldier, the most obviously heroic character on the team, has done terrible things in the past. At the time, he was a mind-controlled assassin, but his knowledge of the "mind-controlled" bit can't take away his pain and remorse. By contrast, Moonstone and the Fixer like playing at being heroes, but they're still villains at heart and quite capable of plotting murder or worse. They're unrepentant of anything they've done. Mach-10, meanwhile, is mechanically very gifted, but like Atlas he shows limited imagination, making the two of them ideal drinking buddies and tag-team partners. So... Mach-10 isn't such a bad guy, and he certainly has great armour - but he's no Tony Stark.

Much of the interest in Thunderbolts lies in the way that genuine redemption often seems to recede, even as Moonstone and the others manage to perform some socially useful deeds and score some impressive wins. While they may get what they want, there's usually something ambiguous or plain undermining in the outcome, and, worse, these anti-heroic characters resort pretty quickly to methods that more conventional heroes wouldn't want to countenance. For at least some of the Thunderbolts, redemption is not out of the question, but nor is it easy to reach for and hold - even for the "nicest" of them.
Posted by Russell Blackford at 11:31 pm