Avengers: Age of Ultron - a review with minor spoilers 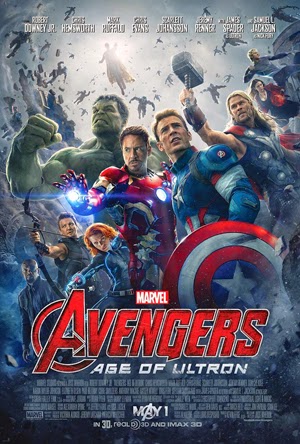 Read on if you don't mind some relatively minor spoilers about Avengers: Age of Ultron.

I won't be giving away any big surprises or major plot points, but nor can I promise to reveal nothing new about the content of the movie. So, the choice is yours!

With that warning duly given, the first point to make is that Avengers: Age of Ultron hits all the notes. If I had a serious criticism of its predecessor, Marvel's The Avengers, it was a certain tameness or going through the motions - a lack of felt danger - in the climactic battle scene where the Avengers take on Loki and the Chitauri. Loki is given a pretty good showing in that scene, but the Chitauri do not seem like worthy opponents for the Avengers. They appear hopelessly incompetent. Things are very different in the equivalent scene in Age of Ultron.

Once again, we are shown a climactic battle between the Avengers and a horde of enemies for them to smash - this time it's an army of robots animated by the malevolent artificial intelligence, Ultron. Once again, the good guys shine: we see what they can do when they truly unleash against their enemies. But the framing and handling of the scene are very different this time, building a sense of real danger. Unlike the Chitauri, Ultron appears truly intimidating, a genuine threat to the Avengers and the world, to the bitter end.

A movie like this thrives by breathing life into extraordinary characters, making them seem plausible, outrageous as they are with their fantastic back stories and their superhuman powers (even superheroes who are presented as, fundamentally, merely human, such as the Black Widow and Hawkeye, possess fighting skills and other abilities beyond those we'd expect, in real life, of Olympic athletes). Age of Ultron is going to please fans because - as with The Avengers - it makes the characters live on the screen. It makes their powers seem real, and highlights their distinctive personalities and emotional drives, and, most notably, the fears that haunt them. It grants the heroes and the villains badass moments, never diminishes any of them, and is (usually) highly respectful of the source material.

The new characters for this movie include Quicksilver, the Scarlet Witch, and the Vision. I can report for their fans that all are portrayed as impressive. In battle scenes against the Avengers, Quicksilver and the Scarlet Witch are devastatingly effective: despite their lack of field experience, they prove to be more than worthy opponents for Iron Man, Thor, and the others. (We don't, however, get a scene with Quicksilver on a par with what's done with Fox's version of the character in X-Men: Days of Future Past.)

All of the actors deserve praise, but, for my money, James Spader steals the show in voicing the various robot bodies employed by Ultron. Spader is menacing in an unexpected, off-beat way, somehow conveying a sense of innocence and wonder at the world Ultron is discovering and feels the need to save - in a fashion - via extinction of the Avengers, humanity, and eventually all organic life. (Some of Ultron's decisions in its war against the Avengers and humanity don't seem especially logical, and of course there is a sense that many decisions by the characters are plot driven, but that is almost inevitable in such a movie, and few examples seemed egregious.)

We are given some touching (in more ways than one) moments between the characters, and these are generally presented tactfully (though some viewers may find it a bit much when we're served up tender King Kong/Ann Darrow interactions between the Hulk and the Black Widow - oh well, they really didn't bother me, but they pushed the envelope of my tolerance just a little bit; with these scenes, your mileage may vary).

We are also treated to plenty of humour. I laughed aloud several times, although the comedy depended, in some cases, on extensive background understanding of the Marvel universe. That's fine: it rewards the long-standing fans. The comic effect often depends on masculine competitiveness between the heroes - something that is gently mocked. At one point, Iron Man/Tony Stark even gets into a bragging match with Thor about the respective merits of their girlfriends, Pepper Potts and Jane Foster (it's refreshing, though, that the merits in question relate to the absent women's intellectual accomplishments, rather than their physical beauty).

Age of Ultron could easily have been a technophobic movie, based as it is on the creation of a powerful and inimical artificial intelligence. To my relief, it doesn't play like that.

I owe the media critic J.P. Telotte the insight that seemingly technophobic science fiction tends to find a place within its value set for the technology that it simultaneously presents as frightening. Age of Ultron is a fairly extreme example, since the general direction is far more technophilic than technophobic. The technophobia/technophilia theme comes to the surface - it is made explicit - at one point in a debate between Tony Stark and Bruce Banner. Stark acknowledges that they are, from others' viewpoints, mad scientists, but he insists they must use their superscience skills to help the world and correct their own mistakes.

At times, Age of Ultron moves so quickly that the action becomes confusing. Some choices in its final editing may have been less than perfect for plot clarity, though the solution is probably to watch the movie again. Overall, it delivers - better, I think, than its predecessor. In particular, fans of this franchise or of Marvel Comics will not be disappointed.
Posted by Russell Blackford at 12:45 pm