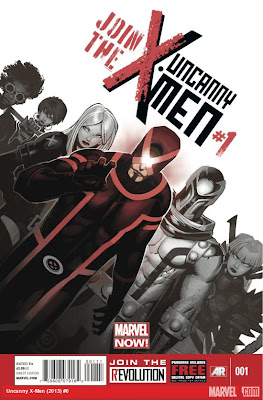 As of next February, the flagship Uncanny X-Men series will be restarted at #1 for the second time in the last year or two. This iteration neatly fits our "Sunday Supervillainy" theme because it focuses on the adventures of what is pretty close to a team of supervillains.

In the wake of the Avengers vs. X-Men event, Cyclops is now a full-blown mutant revolutionary, and his team is made up of Emma Frost, Magneto, and Magik - all of them morally dark characters. Their immediate aim is to rescue young mutants from bad situations and induct them into the team. Their ultimate goal, however, seems to be mutant revolution in some form.

It hasn't escaped anybody, I'm sure, that this rebel X-Men faction is pretty much an update of Magneto's old Brotherhood of Evil Mutants. It will be getting into conflicts with more law-abiding X-Men groups, though apparently it will also have a mission of protecting the world that hates and fears it. In that sense, it is a continuation of the Extinction Team that Kieron Gillen introduced to us in the previous series of Uncanny X-Men, although it is now down to its most hardcore members.

Magik has gradually become a favorite character of mine during AvX and especially since. I never used to think much of her one way or the other, but she's becoming a breakout character for Marvel at the moment. She's being portrayed as one of the most badass, ruthless, and competent of any of Marvel's characters with some claim to heroism - she's someone whom you'd hate in real life, but her destructive, demonic glee makes her a helluva fun character to watch in action.

Also of interest is the Chris Bachalo redesign of the main characters' costumes, which is going to take me some getting used to, though I think I might come to like it. At this stage we only have the cover of the first issue - I'm looking forward to seeing how the new visuals for Cyclops, Emma, Magneto, and Magik work within the covers.

Posted by Russell Blackford at 11:54 pm

I have to confess that Magik has been a favourite character of mine ever since her appearance in The New Mutants back in the 1980s. This is due in part perhaps because TNM was my on-ramp to Marvel's mutant titles, as of 1984.

I empathised most with Magik, out of all of TNM, perhaps because I was one of those gleefully mischevious youngsters who was misunderstood, and enjoted being misunderstood a bit too much. It probably helped that some people mistook me for a satanist (I had fun with that!)

I wasn't terribly happy with how she was often used as a plot device just for some character development angle for Collosus. Her motives, until recently, never seemed to play out whenever the X-Men were around.

I suspect that given the run-around she gave her older brother, and how well she executed it, it's plausible that she could written as being able to outwit Magneto. Without getting to close to him, she seems like she'd know how he ticks better than most, at least.

I've been loving AvX (yay Marvel iPad app). I hope Gillen plays with fleshing out Magneto more in this reboot of Uncanny Xmen, both in terms of his power (he is theoretically the most powerful mutant, able to control all forms off energy, and therefore all matter) and also in terms of his self justifications to be lawless for a greater end. He has been one of my favorite characters for years and I like him having another turn in the spotlight.

I also really liked Magik, she had a tragic story, dragged off to Limbo as a child and raised there, but she overcame adversity, became the Queen of Limbo and joined an X-Team to make a difference. She even taught her demon minions to be a little less violent (although S'ym was a bit incorrigible).

I know that all comic characters move in cycles, being good guys, turning to bad guys, becoming good guys again, I just really hate to see it for some characters who have fought hard to make progress.

Other than Magik, though, the new lineup of Uncanny X-Men isn't my cup of tea. I have always hated Emma Frost with a passion and what she's done to Cyclops, he used to have a spine, all of that went away when they got together. Magneto, through his various incarnations, has never impressed me as "hero" material and he's really just a "less villainous villain" from time to time, so I don't really care to see him headlining a book.

So what's left? We have a book that ought to be called "Uncanny X-Villains" and if it were, I'd feel much better just skipping it.

I wonder how popular it would be if Marvel went all the way and created a "Brotherhood of Mutants" or "The Brotherhood" book. Some people, like Cephus, might be turned off by the concept. But I suspect a lot of other people would find the adventures of a bunch of "less villainous villains", getting in trouble with Marvel's heroes as well as with various threats to humanity, quite appealing. After all, the Thunderbolts proved to be popular: it was an experiment by Marvel that worked, apparently to an extent that surprised Marvel.

This assumes that the characters are well written, that there's an emphasis on their internal struggles, etc., etc.

I suppose the new Uncanny X-Men might be something very like that, but it would have been really upfront if Cyclops had decided to call his team the Brotherhood instead of claiming that it is a group of X-Men.

Anyway, I'm sure this book will sell best as Uncanny X-Men, rather than as The Brotherhood or anything similar. I'm just wondering idly how it would have fared in the market if the creators gone even further with the team of supervillains concept.

This contains some of my favourite characters ever (I was a Magik fan from way back). It's an intersting concept, but the problem for me is, well, BUYING comics. I used to have someone who would get them for me and then I'd get them every few months, because I really, really hate the "one small part of a large story" angle, wanting to read it all one shot (this is another reason for me to watch DVDs of series over watching TV at all right now). And where I live I don't always get somewhere with comics that frequently, and for really popular arcs I'll miss the back issues. Maybe I should look at a subscription, if they still do that?

Anyway, on that note, I just got the TPB of Schism and loved it, and that definitely had the hallmarks of what happened here.