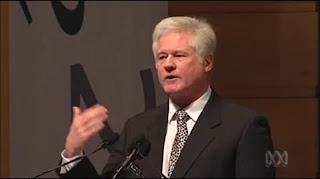 I came across this somewhat by chance. Eric MacDonald comments on the IQ2 Australia debate on the topic "Atheists are wrong", held in Sydney last year and subsequently broadcast on national radio and television here in Australia.

As my regular readers will know, Peter Jensen (the Anglican archbishop of Sydney), and theologians Scott Stephens and Tracey Rowland spoke in favour of the motion.

Tamas Pataki, Jane Caro, and I (pictured here from the ABC's video) formed the opposition team, speaking against it.

Written versions of the speeches were also published on the ABC Religion and Ethics Portal, though mine is a reconstruction that may not much resemble what I actually said, as I spoke with little recourse to my notes.

For whatever it might be worth, the opposition team was declared victorious in the debate: following the rules used by IQ2, the live audience shifted toward our position when polled before and after the debate. We gained a big chunk of the undecided vote and a small piece of the "for" vote.

It's hard to know what to make of these sorts of results, and I discussed in some posts last year what, if anything, such debates, on whatever topic, really mean. Arguably, they are won by whichever team seems more likable overall to the audience, but it would be interesting to see some research to establish whether there's more to it than that - just why do people change their votes? What we do know about debates in the IQ2 format is that the pre-debate and post-debate votes often, indeed typically, show dramatic shifts one way or the other, for whatever reasons.

Eric MacDonald's post contains some embedded video from the debate (though you can find this elsewhere). It includes an excerpt from my presentation as third speaker for the opposition, as well as material from Dr Jensen's performance that night.

MacDonald is rather scathing about the theodical ideas put forward by Dr Jensen during the debate in response to my challenge as to why the world (not to mention the Christian churches, with their very flawed histories) looks as it does if it's the creation of an omnicompetent god of love. Says MacDonald:


Their god, according to Jensen, spent billions of years thoroughly enjoying himself, but, in order to become human, we need to suffer and be diminished, and Jensen, and hundreds, perhaps thousands, of his ilk, are not at all backward when it comes to forcing people to undergo this suffering and this diminishment, all the while repeating the empty catch phrases about the goodness, the power and the love of their god.

Posted by Russell Blackford at 11:05 pm

I totally missed that debate.

It feels very peculiar listening to a televised debate in Australian accents where neither of the teams are captained by Paul McDermott.