Currently reading: Chained to the Alien 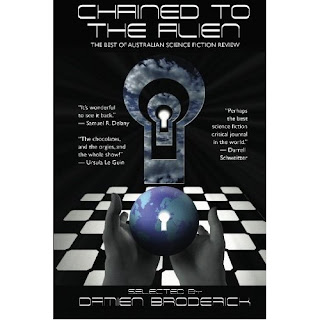 My author's copy of Chained to the Alien turned up recently, and I've put aside a bit of time to read it (I'm over halfway through). This book is a selection of material from the relatively short-lived, but nonetheless legendary, zine, Australian Science Fiction Review (Second Series) published from 1986-91. I was one member of the editorial collective, which consisted, in addition, of Jenny Blackford, John Foyster, and Yvonne Rousseau. Lucy Sussex was also on the team for about the first two years, while Janeen Webb joined for the last four years or so.

Much of the material was written by members of the editorial collective, but we also had input from a wide range of people from around the world, and we influenced other zines including The New York Review of Science Fiction. The ASFR(2) days were weird and wild, and I'm astonished as I reread some of the material that Damien has selected - the intensity of the analyses and the passion of the debates were really quite extraordinary. Looking back, we created something special. One highlight is a symposium on George Turner's The Sea and Summer, a.k.a. Drowning Towers, in which several of Australia's best sf critics examine Turner's Arthur-C.-Clarke-award-winning novel from all angles, creating a composite work that is almost as interesting as the novel itself.

I put a huge effort into the first couple of years of the zine in particular, as a result of which almost 30,000 words of my 1980s literary criticism is reprinted in Chained to the Alien. Again, when I read this material by my younger self, I am surprised at its intensity and passion. This applies especially, but not at all solely, to my long discussion of Samuel R. Delany's Stars in my Pocket Like Grains of Sand (which won me an award the following year, and attracted an appreciative letter from Delany himself). I don't think I could write in that way about literature any more, partly because my 1980s work has a hint (fortunately, no more than that!) of influence from then-fashionable literary deconstruction ... something I've left well behind me in the following two decades. But it's mainly because I don't think I can summon the same focus and energy when talking about works of fiction as I had back then. If I was, in some ways, a little bit naive, that may even have helped my energy level.

Damien is working on a companion volume of selections from ASFR(2), with more emphasis on the shorter pieces that appeared in the zine and on some of the more fiery debates that arose as time went on. I'll look forward to seeing this second book later in 2010. Meanwhile, okay ... ASFR(2) was, I realise, a fairly obscure little corner of Western culture. But this is good stuff. I'm obviously biased, but if you have an interest in science fiction as a literary genre, and in what happens when bright, geeky people discuss the genre with a kind of intellectual obsession that sometimes rises to fury, you just might like to have a look at Chained to the Alien.

Or maybe you'd like to pass on the word.
Posted by Russell Blackford at 10:26 pm

my 1980s work has a hint (fortunately, no more than that!) of influence from then-fashionable literary deconstruction ... something I've left well behind me in the following two decades.

This reminds me of something I noticed a while ago: the way fandom uses the word "deconstruction" seems significantly more mundane than the way literary theory does. Of course, I probably shouldn't be surprised, as ever since Derrida cooked it up they've been deconstructing the idea that one can define deconstruction . . .