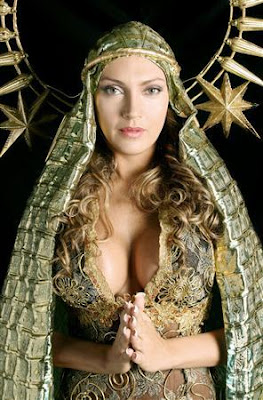 It's been reported that Chilean clerics are upset by a fashion show in which a designer has dressed his models in garb suggesting traditional presentations of the Virgin Mary.

I take especial delight in the following announcement from the country's Episcopal Conference, which has just the correctly-weighted mixture of religiose pomposity and post-this/post-that gobbledegook:

"We look on with special pain and deplore those acts which seek to tarnish manifestations of sincere love toward the Virgin Mary, which end up striking at the dignity of womankind by presenting her as an object of consumption."

Surely that sentence should be eligible for some sort of award. If it doesn't already exist, perhaps it ought to be established. I suggest it be called "The Chilean Episcopal Conference Prize for Moralistic Obscurantism". But maybe somebody out there can do better. The caps I've used don't make a word, or anything, so use your imaginations to improve on it.

Not content, of course, with expressing their "special pain", the local Torquemadas of the Cult of Misery mounted (unsuccessful) legal proceedings in an attempt to stop the show from going ahead. All of which shows that freedom of religion and belief is fine with the Cult of Misery as long as it means their freedom to call on the apparatus of the state to you make you conform to their religious beliefs.

Is it any wonder that I get worried at the idea of a Catholic priest, however good a bloke he is, being in charge, here in Australia, of a committee to work out what rights and freedoms Australians ought to have. I'm sure Frank Brennan has many fine qualities, but even urbane and compassionate foxes aren't put in charge of hen houses.
Posted by Russell Blackford at 7:03 pm

That picture fills my head with. . . inappropriate thoughts. For picture captions. "The Holy Ghost was one lucky, lucky man", etc.