Lock up your nubile daughter! 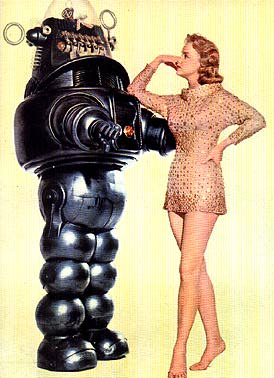 At Conjure a couple of weeks ago, Jenny and I found ourselves in the unusual situation (for us) of being on a panel together - in this case, we were two members of a suitably high-powered panel on what real scientists can learn from their science fictional counterparts.

Before the panel, we brainstormed a bit about the possibilities (as you do). We decided that, for example, real scientists could learn the following:

*Lock up your nubile daughter.
*Beware of monsters from the id.
*Never let a fly into your teleportation device.
*Don't pull that big, black lever!
*Practise saying, "MUAHAHAHAHAHA!"

In fact, the scientists in science fiction are more likely to be presented as the modern equivalent of the Impious Magician - someone who defies God, or the order of things, by seeking to uncover and control nature's secrets. Such characters don't have a lot to offer as role models for real scientists.

There are, of course, other kinds of scientists in science fiction: granite-jawed heroic scientists, for example, and the doddering, if useful, scientists who frequently act as helpers. But none of these are especially good role models for real scientists. Apart from the fact that it has inherited medieval notions of impiety, science fiction is a popular genre which presents stories of conflict and suspense, qualities that are difficult to generate from images of responsible working scientists sanely and competently going about their business. Some hard SF does try to present exactly that, occasionally with success (in particular, some of Gregory Benford's work comes to mind here), but this is a minority stream within the science fiction tradition.

On the other hand, science fiction seldom manages to be one-sidedly technophobic. Its scientists may not be role models for anyone, but even in the most cautionary tales the products of science and technology often end up being just plain cool. Their allure is surely part of what makes Hollywood action movies so attractive. Even Terminators can be good guys, after all, and the technophobic imagination always seems to work partly against itself.

Still, if you're a megalomaniacal scientist, remember to lock up your nubile daughter, especially when there are robots, aliens, prehistoric swamps, or lusty space captains around. Otherwise, you're surely asking for trouble.
Posted by Russell Blackford at 11:11 pm