Dershowitz on the origins of rights 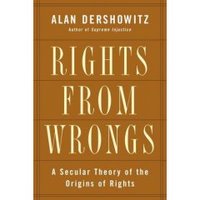 Alan Dershowitz's Rights from Wrongs: A Secular Theory of the Origins of Rights provides a sensible account of the nature and origin of rights. Dershowitz uses the word "rights" in a fairly narrow sense - as referring to claims that can be made by an individual against the power of government. This appears to be a useful sense of the word, and it has the virtue that it could refer to either negative rights (such as freedom of speech) or positive rights (such as a claim to the resources needed for basic subsistence, or for a decent life as understood in the society concerned).

What is most useful and refreshing about Dershowitz's account is that it does not attempt to ground rights in some implausible moral principle, such as the principle that we are obligated to treat everyone with equal concern and respect. On any non-trivial interpretation, such a moral claim is transparently absurd. I am under no obligation to show the same concern to strangers as I show to myself or my loved ones. Nor am I under any obligation to respect people who are clearly foolish or fanatical. It is plausible that I owe all human beings a duty not to treat them cruelly, and perhaps a positive duty to rescue them from imminent danger if it is easy for me to do so. But I have no obligation to respect them or their projects, much less to give their projects the same respect that I give to my own projects, those of people whom I especially care about, or those of people whom I particularly admire.

Instead, Dershowitz grounds rights in our collective historical experiences of wrongs - which he does not seem to define, but he evidently means those actions which contribute to great evils, such as massive suffering, and which no reflective person would want to defend. The idea is that the social recognition of rights that prevail over majoritarian wishes is necessary in order to prevent, or at least resist, the occurrence of certain kinds of evils in which governments are implicated, often with majority support. Dershowitz does not find any external grounding for rights, and nor does he try to give a more theoretical account of what wrongs and evils are. Though he does not explicitly put it this way, he seems content to rely on the fact that there are some things that it is rational for beings like us to fear, and this particularly includes some governmental acts.

In my terminology, Dershowitz is a moral sceptic - since I use the expression to refer to anyone who denies that there are objective sources of morality which transcend our actual interests. He prefers to talk about having a "nurtural" or "experiential" theory of rights, and this may in fact be better language for the purposes of advocacy: in particular, the word "experiential" sounds positive, and readily connects with the actual history of evils, rather than sounding vaguely nihilistic and defiant, as "moral scepticism" possibly does. Still, I count him as a moral sceptic, and a good example of how moral sceptics can say very useful things about how we should live our lives and contribute to public policy.

As I was reading, I sometimes felt that the argument could have been developed with more rigour, but in the end Rights from Wrongs is a book that I wholeheartedly recommend. I hope it will find a wide audience.
Posted by Russell Blackford at 1:31 pm