The Selfish Gene in The Guardian

(Republished from Talking Philosophy (August 2012). At the time, Richard Dawkins liked this post on Twitter, and called it perceptive", so it can't be far from the mark in explaining his view.)

The Guardian has a little gem of a retrospective review of Richard Dawkins’ The Selfish Gene (first published 1976). The reviewer, science journalist Tim Radford, mentions that his copy of the book is the first paperback edition of 1978. Well, we have something in common – mine is a 1983 reprint of the same edition, and I must have first read it almost thirty years ago. One day, I need to broach the thirtieth anniversary edition of 2006, which has a new introduction by the author, plus other new material.

When I was young, I was struck not just by the book’s content but also (perhaps even more) by its beautiful explanatory clarity. This was how to write for a popular audience. The Selfish Gene made me a lifelong fan of Dawkins, not only as a thinker and a scientist, though of course there’s that, but above all as a writer. I would struggle if asked to name other non-fiction writers whose prose I enjoy so much, or who are so successful in communicating difficult ideas. Perhaps I could compare Bertrand Russell, or, in our current generation, Steven Pinker, who has a similar knack for images that organise his complex messages and convey them vividly to the reader. 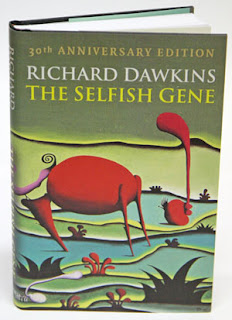 Thus I’m always surprised when Dawkins is criticised for the “selfish gene” trope itself, as if it involves some kind of scientific or philosophical faux pas – as if, in fact, he were ascribing psychological motivation to tiny chemical strands, or perhaps talking about genes that code for selfishness. He is doing neither of those things, and neither of them occurred to me when I first read the book all those years ago. It’s all clear enough unless you bring your own murkiness to the text.
Genes do not, of course, have emotions or desires; they do not have interests, in anything like the sense that we do. A selfish gene is not like a selfish person who acts to advance her own narrowly understood self-interest without compassion or respect for other people. Nor does Dawkins suggest such a thing; if you read the book in this way, you are bringing in issues that are remote from what is before your eyes. Rather, the “selfishness” of genes is a small tweak on a common idea in biology, whose practitioners apply the word to behaviours that have the effect of helping the individual organism, whether or not it possesses any psychological motivation. When we tweak this just slightly, the thought is that the effect of genes on the world, when you look closely at what’s going on, is to replicate those same genes, rather than to promote the physiological welfare of anything else. In a biologist’s sense of the words, genes really can be described quite readily as selfish, as opposed to altruistic. All of this is explained in the book’s first chapter.
But we don’t need to think of such terms in any technical way to get Dawkins’ point. That is, we needn’t begin with any training in biology to “get”, intuitively, the relevant idea of selfishness. It’s clear throughout that we can begin with an everyday understanding of “selfishness”, which we can then deploy as a metaphor. Though sequences of DNA are not the kinds of things that can possess desires, or any psychological makeup at all, they act as if they were sentient things devising strategies to replicate themselves in successive generations. The process by which life continues and evolves is well explained at the level of what is needed for genes to achieve this “selfish” goal.
So, I’m bemused by all the misunderstandings, and I don’t think they relate to any lack of clarity in the text itself. Perhaps they highlight the intrinsic difficulty of the concept – but how hard is it really? – or perhaps it is simply the anxieties that some readers bring with them. We all have a tendency to interpret via our anxieties, which can get in the way of what is in front of us.
Radford is similarly bemused:

A few years later I heard a distinguished, elderly science historian rather brusquely describe it as a prime example of a metaphor out of control.
That barb was not just misguided, but wildly unfair. Dawkins was always clever with metaphors, but his recurring imagery of a gene concerned only with its replication and survival is tightly controlled: in every chapter, we are reminded that it is a metaphor, an analogy, an “as if”, a useful way of thinking about how behaviours, strategies and responses might have emerged from the mix of ever-renewing chromosomes and the disorderly experience of life.

The book does, in fact, get to issues about sociality, and of altruism at the level of organisms, but that is in the second-last chapter. To be sure, Dawkins does suggest that you’d expect genes to code for organisms that are, in turn, selfish – this is because genes are most likely to be passed down by organisms that are programmed to do what is needed for their own survival, at least until they can reproduce. Nonetheless, he seeks to explain how altruism, in the biological sense, could arise. (Behaviour that benefits other organisms may, in some circumstances, be most effective at passing down the individual’s genetic code.) At the end Dawkins picks up an idea planted in the opening pages: how far human beings are capable of a pure disinterestedness that goes beyond biologically altruistic behaviour.
Thus, the relationships between the selfishness of genes, the biological selfishness of individual organisms, biological altruism, and what we call a true altruism, or unselfishness, are all made clear.
Actual selfishness is never advocated, whatever some of Dawkins’ most obtuse detractors might think. Let me add, on this subject, that Dawkins’ The Blind Watchmaker is not actually about the art of making small chronometrical devices, and nor is his Climbing Mount Improbable a textbook in the skills of mountaineering.
All this, however, is more or less by the by. The Selfish Gene is a lovely explanation of a gene’s-eye view (though of course genes don’t have actual eyes) of life, its functional, bizarre, splendid (and sometimes horrible) intricacy, and how this has come about. The book is also a pleasure to read and a fine model for other writers. Radford, too, deserves praise: in a short space, he has done the book justice, seeing and appreciating it for what it is.
Posted by Russell Blackford at 11:57 am