"Hylas and the Nymphs" furore 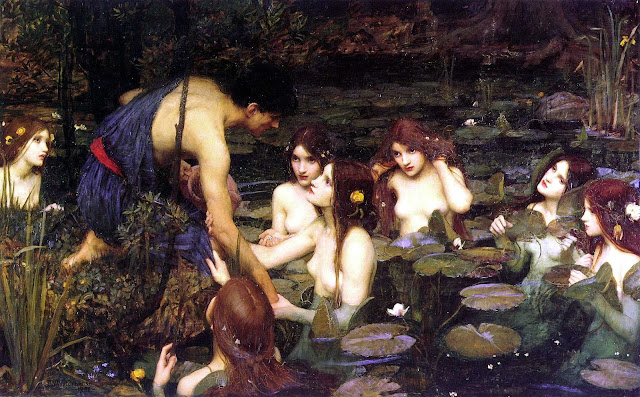 A week or so ago, Manchester Art Gallery removed from its walls the treasured pre-Raphaelite painting "Hylas and the Nymphs" by John William Waterhouse. It has now been restored after a public outcry.

The moral of the story is that when you think something is not right it is good to protest about it. Making a statement here on this blog would not have helped much, but actually writing to the gallery (in this case ... mutatis mutandis in other cases) does help, as does urging others to do so.

I was especially incensed about this incident, because I've always loved this particular painting. I've long had a large copy of it on my walls at home.

For the record, I set out below what I sent to the gallery, a couple of days ago, when I heard about the gallery's action. I'm not claiming that what I wrote is perfect, but do take note that when you feel strongly about something you can dash off a short letter and send it by email - and that it won't even take you very long. I haven't seen what anyone else sent, but I imagine that a lot of the other correspondence received by the gallery from all over the world was along similar lines. And it produced the desired result.

Notice that I (just) managed to stop short of calling for anyone to be fired. There's too much of that. Still, my correspondence was not merely in response to someone expressing their views on a topic of public importance; it was in response to pretty high-handed action contrary to the very purpose of the person's job, which is to act as a custodian of great works of art, not to be a political activist.

I am shocked at your decision to remove "Hylas and the Nymphs" by John William Waterhouse, a work that I have loved for decades. My wife and I have a large print of it on one of our walls at home, and we're proud of it.

You are privileged to be the custodians of this treasured work of art, and it's your responsibility to make it available to the whole world. Removing it from view, apparently for reasons based on political ideology, is an extraordinary act of cultural vandalism. I understand that it will no longer even be possible for the public to buy postcards of "Hylas and the Nymphs".

I urge you to reverse this appalling decision immediately. I'm tempted to urge that you also fire whoever was responsible. That would be going too far: we are all entitled to make mistakes, even serious ones, without losing our livelihoods. But the person responsible should certainly be counselled about the nature of their responsibilities, so they won't do something like this again.

Posted by Russell Blackford at 12:20 pm