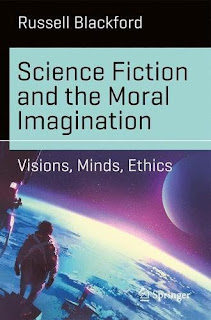 My new book, Science Fiction and the Moral Imagination: Visions, Minds, Ethics, is available for pre-order on Amazon. Amazon is now giving October 4 as the date when the book will be available from its site.

These things often do slip a bit, so I hope it won't slip any further. (Springer is also now giving October 4 as the publication date, and you can pre-order directly from its site.)

Science Fiction and the Moral Imagination is not merely a book that uses science fiction narratives for pedagogical purposes to illustrate concepts in the field of philosophy (though there are some other good books along those lines). It is much closer to being a short (around 200 large-format pages) history and philosophy of the science fiction genre.

If you do read this book, you'll see the enormous amount of scholarly work that went into it. My books tend not to be all that long - mainly because the publishers I work with tend to prefer it that way - but they contain little in the way of padding and much in the way of solid information and analysis. In this case, the price is also very reasonable for a book from an academic publisher, with Amazon currently charging only US$13.47 for the trade paperback edition.

I'll  quote the back-cover blurb from Gregory Benford in an effort to pique your interest further:


In this highly original book, Russell Blackford discusses the intersection of science fiction and humanity’s moral imagination. With the rise of science and technology in the 19th century, and our continually improving understanding of the cosmos, writers and thinkers soon began to imagine futures greatly different from the present. Science fiction was born out of the realization that future technoscientific advances could dramatically change the world. Along with the developments described in modern science fiction - space societies, conscious machines, and upgraded human bodies, to name but a few - come a new set of ethical challenges and new forms of ethics. Blackford identifies these issues and their reflection in science fiction. His fascinating book will appeal to anyone with an interest in philosophy or science fiction, or in how they interact.

This is a seasoned, balanced analysis of a major issue in our thinking about the future, seen through the lens of science fiction, a central art of our time. Everyone from humanists to technologists should study these ideas and examples. Blackford’s book is wise and savvy, and a delight to read as well.

Early sales help visibility, so if you're thinking of buying this volume (or asking your local academic library to do so) please consider doing so sooner rather than later.