Introducing myself ... and philosophy 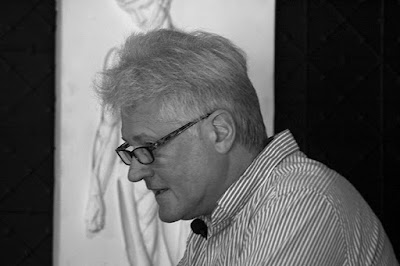 [This article was originally published on The Conversation on June 9, 2015. It was my attempt on the Cogito blog to introduce myself to its audience. I'm republishing it here for folks who might have missed it at the time. The "book about fundamental moral theory" that I was working on has been published in the interim as The Mystery of Moral Authority. Read the original article.]


Before we go too far, allow me to introduce myself to the readers of Cogito (and more generally, of The Conversation). Before I even get to that… let me say that I am pleased and proud to have been invited to join this multi-author blog, which features a diverse group of Australian philosophers with established public profiles. I expect to see provocative contributions on a wide range of issues.

A bit about me

A little about myself, then. First, so you can put a face to the name, I’m providing a photo, courtesy of Embiggen Books. Second, you can find my website here, including an academic CV.

I grew up in Newcastle, NSW, where I returned a few years ago after three decades in Melbourne. Over those decades, I had a somewhat tortuous career that involved periods in academia, the Australian Public Service, industrial relations (particularly courtroom advocacy), and legal practice. I am now a Conjoint Lecturer in the School of Humanities and Social Science at the University of Newcastle, while devoting most of my time to writing books and editing the Journal of Evolution and Technology. This editorial, published in 2008 when I was based at Monash University and had only recently taken over as editor-in-chief at JET, sets out something of my vision for the journal.

My personal blog, Metamagician and the Hellfire Club, can be found here, and you can follow my Twitter feed: @Metamagician. I’m also a frequent contributor to Free Inquiry, New Philosopher, and The Philosophers' Magazine.

My work often involves sceptical scrutiny of social institutions that claim the authority to tell us how to live our lives: notably religion, political ideology, morality, and the law. I defend philosophical atheism, secular government, political liberalism of a kind familiar to readers of (say) John Stuart Mill or Joel Feinberg, and a form of moral scepticism that understands morality as a pragmatically useful form of social technology that is often (indeed, somewhat pervasively) regarded as something more.

As a taste of my views on the so-called “scientific skeptic” movement, which I support, you might like to check out this blog post, where I distinguish between scepticism and denialism. (This movement is, of course, not sceptical about science but about pseudoscientific and supernatural claims.)

I am currently working on a book about fundamental moral theory, another about the presentation of moral issues within science fiction, and an edited collection (with co-editor Damien Broderick) on the problem of philosophical progress. I’m also working on articles and talks about moral error theory and its implications, bioethics without a concept of sanctity, the intellectual relationship between Nietzsche and the contemporary transhumanist movement, and the vexed concept of “scientism”.

In this introductory post, I don’t plan to set out any particularly sophisticated or complete views on the role of philosophy. As a first approximation only (and with a hat tip to Graham Oppy), I understand philosophy as reason-based, intellectually honest and rigorous investigation of deep questions that produce much existential anxiety while defying any empirical solution. Those questions relate, for example, to the possible existence of God and/or an afterlife, free will, the authority or otherwise of morality, and the foundations of inquiry itself: i.e., to questions of what should count (either in general or in specific domains) as a cogent argument or as good evidence for a proposition.

I don’t see any sharp dividing line between philosophy and other fields of inquiry, including the sciences. Although I can’t argue the case in this introductory post, I think philosophers should draw upon well-established empirical findings from the sciences and from the other humanities - such as various areas of historical and textual scholarship - while making our best attempts at conceptual clarification of massively confused issues. In some cases, a successful outcome of philosophical inquiry might be the founding of a new field of empirical study (whether or not it should, strictly speaking, be called a “science”). Indeed (though again, I can’t argue for such a large claim today), I believe that we are now well-placed to integrate moral philosophy with other sub-disciplines from the sciences and humanities that study the phenomenon of morality. Our generation has an opportunity to create an expanded and more empirical (or broadly scientific) discipline of moral philosophy or moral science.

These questions are all inherently fascinating and of obvious public interest. I wholeheartedly urge other philosophers to engage with them publicly. Furthermore, I think that philosophers have a role in commenting on more specific moral, political, and cultural controversies. With our commitment to intellectual rigour and to high standards of logic and evidence, we can comment in ways that contrast with the tribalism, propaganda, and polemics that characterise so much contemporary debate on hot-button topics.

We do, of course, inevitably have our biases and prior assumptions, but at least we can be aware of such things as formal and informal logical fallacies, reliance on deeply contested assumptions, motivated reasoning, the dangers of emotional manipulation, group polarisation, and information cascades, and other factors that distort inquiry and debate. When we’re at our best - and difficult though it may be - we approach our opponents and their views with charity, looking for whatever truth or wisdom may be found in their viewpoints.

Our own contributions will never be perfect in their standards of rationality. As philosophers, we may, however, be able to offer fresh perspectives on difficult issues. We can strive for at least some detachment from the rival views of the usual moral and political tribes. That’s an ideal, of course, and I realise in advance that I will not model it flawlessly. Nonetheless, it’s an ideal that I recommend and that I’ll aim for as well as I can in the posts to follow.

Posted by Russell Blackford at 11:15 pm