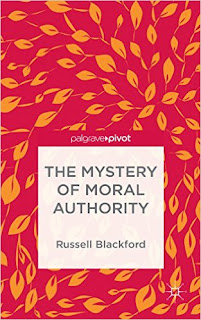 My new book, The Mystery of Moral Authority, has now been published by Palgrave Pivot, bearing an official publication date of 2016 (although Kindle copies, have been available for about three weeks now). This is a short monograph of about 45,000 words. That's not a long read, but it's long enough for me to explain my positive views about the nature and role of morality in a reasonably complete way.

In a book of that length, I can't discuss every possible objection to my views or every prima facie plausible alternative to them, so I don't claim that this is a comprehensive account of moral philosophy. It is, however, sufficient to show how the various parts of my thinking fit together - something that I've never done before in one place.

Writing The Mystery of Moral Authority also forced me to identify gaps and vagaries in my thinking, discuss counterarguments, deepen my understanding of the field, and modify my initial views (at the time I started writing) as needed when I followed arguments where they led.

Although it's not a comprehensive account of the entire field of moral philosophy, I do think that it would make a good undergraduate textbook - not an entirely orthodox one, of course, given how sceptical I am about most existing moral theories. It would at least be a good supplementary text to read alongside one of the widely used texts, such as the popular James Rachels book, Elements of Moral Philosophy.

Also, though I do argue for a particular thesis, I try to be more careful and fair to rival positions than is often the case. I don't think anyone who supports one of the positions that I criticise could get the impression that I'm going out of my way to distort and strawman them. I've taken much care to produce a scholarly book - and particularly to understand, and convey to readers, what is strong or attractive in rival positions. Any misunderstandings or dubious selections of material to critique (and there are bound to be some questionable decisions with such a book) are inadvertent, rather than chosen for rhetorical reasons.

The Mystery of Moral Authority will be interpreted as a defence of moral error theory - and in a sense that's correct. Note, however, that it's a defence of my own form of error theory, which is a relatively weak one ("weak" in the sense of not making statements that require some kind of extraordinary evidence or argument to support them). It's not the moral error theory; it's my sceptical, pragmatic account of morality.

The key set of points that I argue for are that human beings need moral systems, that they amount to a kind of social technology, that they cannot take just any form if they are to suit widespread human purposes (and in that sense they are not merely arbitrary), but that, as a fact of history, they are rationalised by societies, cultures, religions, etc., on various false bases. The result is that much of our moral language is not literally true. On the other hand, we do have considerable resources to say that some moral systems (and some particular moral norms) are better than others. What we can't say, I believe, is that there is one true moral system.

For more, you need to read on in the book itself. I don't have a simple thesis beyond the italicised sentence in the previous para. That sentence gives the idea, but it needs to be explained further by reading at least a good chunk of those 45,000 words of text. I hope some readers of this blog will take me up on that.

(Of course, the book is a bit expensive for its size - which is common for academic books. I never press people to buy my books, but some readers may want to make sure their local academic libraries get it in.)
Posted by Russell Blackford at 10:05 pm