Why "The Hellfire Club"? 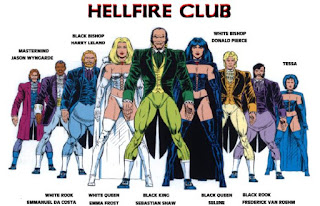 This piece was originally posted on the Skeptic Ink blog network during the period when I moved the blog there, and it was, indeed, just "The Hellfire Club". It has since reverted to its original name "Metamagician and the Hellfire Club"...

The primary reference, of course, is to the libertine clubs of the 18th century that used this name. Members of those organisations thumbed their noses at the sexual and other mores of the time, and one of the hints in the title of the blog was that this would, ideally, be a blog for a fairly tight-knit group of people who would not have much regard for conventional moral ideas, sacred cows, unexamined social assumptions, and the like.

The blog attracted some (modest) popularity, and has gained an audience that is critical, thoughtful, and (quite rightly) happy to disagree with my views. So it is certainly not the tight-knit bunch of my friends that I expected way back in 2006. Still, I think the part about not just accepting social convention at face value still applies. This is a place where many conventional notions of virtue and moral goodness are considered … questionable. And not just conventional ones, favoured by the social majority. All forms of dogma, authoritarianism, moralism, and moral panics and posturing are treated with skepticism here.

As I’ve said before (on the old site), it has never been solely, primarily, or dedicatedly an atheist blog, so the title was not especially about the idea that we are unbelievers on our way to Hell (in the view of theologically orthodox Christians). However, I welcome that implication: my co-editorship of 50 Voices of Disbelief (followed by my co-authorship of the forthcoming 50 Great Myths About Atheism) got me more involved in the organised atheist movement, and it certainly makes the scornful joke more relevant.

Of course, there’s also the association with the villainous Hellfire Club of the X-MEN mythos, itself an embroidered version of the original libertine clubs. Those Hellfire Club members – particularly Emma Frost – are almost the blog’s mascots.
Posted by Russell Blackford at 2:07 pm