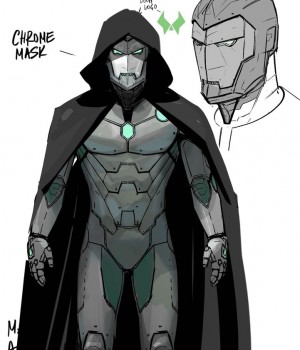 It seems that Iron Man (Tony Stark) may be in for a rocky time as the current Civil War II series/event unfolds in Marvel Comics. We don't know what is in store, except that there are two ongoing series planned, with one version of Iron Man (the Invincible Iron Man) played by a Black teenage girl (Riri Williams) and another version (the Infamous Iron Man) played by Doctor Doom, who is currently reformed from his usual villainous, megalomaniacal self. Doom has a new set of Iron Man armour that draws on his own classic look.

Poor Tony Stark may be dropping out of the picture somehow! Let's hope they don't kill him off as they've done to some other classic heroes of late.

Having Doom as a good guy of sorts is not all that unusual these days. He's one of those villains who are so interesting, and have become so popular, that you have to keep telling stories about them. And those can't, at the risk of boredom, be story after story in which a charismatic adversary like Doctor Doom simply loses, with various heroes in sequence foiling his various evil plans. He has to do more interesting stuff than that, save the world now and then, and generally get to kick ass in his own right.

This syndrome whereby a well-constructed and charismatic villain becomes a sort of hero or anti-hero - and certainly a character with depth and motivational complexity, and a code of honorable conduct - has a venerable history in popular culture. In the long-running serial form of comics, it's almost inevitable that many fan-favorite villains will take that path. At Marvel alone, there are now innumerable villains who've become much-loved semi-heroic characters despite their moral flaws (as well as several out-and-out heroes who began as villains). Even monstrously powerful hardened criminals, like Juggernaut and Absorbing Man, are shown to have likeable sides.

However, it's a bit more than that with Doom, since the events of the most recent Secret Wars event have left him very much physically and psychologically changed.

The creation of Riri Williams is transparently part of Marvel's ongoing attempt to create a more diverse (in terms of race, sex, cultural background, sexuality, etc.) crop of superheroes for our contemporary world. Most of Marvel's core recurring cast - its most iconic characters - were created in the 1960s (or even earlier in a very small number of cases); as a result most of them are white, male, and straight, and many of the heroes in particular are from conventional American backgrounds (as imagined around the middle of last century).

I'm good with the attempt to alter this mix, but the trick is to create great new characters whom readers relate to and actually care about. Readers won't warm to characters out of a sense of political duty, but must come to love them because they engage interest and concern, and because reading about them is actually fun. So it has to be an organic, carefully thought out process. It seems to have worked well with the new Ms. Marvel (Kamala Khan), so I'll hope Riri Williams will also turn out to be an engaging character.
Posted by Russell Blackford at 1:54 am